In professional English football (soccer), no official statistics on concussion rates are released. However, data from a number of sources demonstrate football to be a source of concussions and head injury hospitalisations, with a number of high-profile diagnoses of degenerative brain diseases amongst former professional footballers announced within the media in recent years. Research is also now pointing towards repetitive head impacts, including heading the ball, contributing towards risk of neurodegenerative disease.

Since 2018, The Drake Foundation has funded several studies focussed on improving the understanding of concussion and head impacts in football.

In June 2020, The FA announced updated heading guidance within youth football, from all age groups between under-six and under-18, in association with the Irish and Scottish FAs. The primary amendments included a ban on heading in training at foundation phase level, followed by a graduated introduction of the practice between the under-12 and under-16 age groups. Heading during matches were still permitted by the amended guidelines.

The following year, in July 2021, The FA established new heading guidelines at all levels of professional and amateur football in England, from the Premier League and Women’s Super League to grassroots level. The new guidance advises that no more than 10 ‘higher force’ headers are carried out during training each week, as well as recommendations that clubs create player profiles that consider gender, age, position and the number of headings they are expected to complete per match.

Unlike rugby and cricket, English football does not currently permit concussion substitutes. However, in January 2021, The FA announced that it had successfully applied to the International Football Association Board (IFAB) to introduce additional permanent concussion substitutions trials across the Premier League, Barclays FA Women’s Super League, FA Women’s Championship and Emirates FA Cup.

Trials got underway in the Premier League in February 2021, which was initially due to run until the end of that season but was extended to the 2021/22 season. From October 2021, the trial will extend to all Premier League reserve and youth-team matches.

FIFA, the sport’s governing body, endorses the Return to Play criteria, which advises that six days is the minimum required to overcome concussion. FIFA also follows concussion diagnosis and treatment guidelines established at the International Conference on Concussion in Sport, in Zurich in November 2012.

The Drake Foundation has funded several studies that explore the impact of concussion and head impacts in football and the long-term health implications amongst current and former professional footballers, including:

February 2017 marked the publication of our first completed study, ‘Mixed pathologies including chronic traumatic encephalopathy account for dementia in retired association football (soccer) players’, the first of its kind. In this study, brains from a group of retired football players were studied for signs of chronic traumatic encephalopathy (CTE). A total of 14 former players were included in the study and post-mortem brain examination conducted on 6. The study was split across three phases, the first focusing on football injury rates, the second exploring behavioural changes recorded prior to death in retired former players, and the final phase focusing on the post-mortem brain examination of the players. This study was the first to identify CTE in a group of former football players. 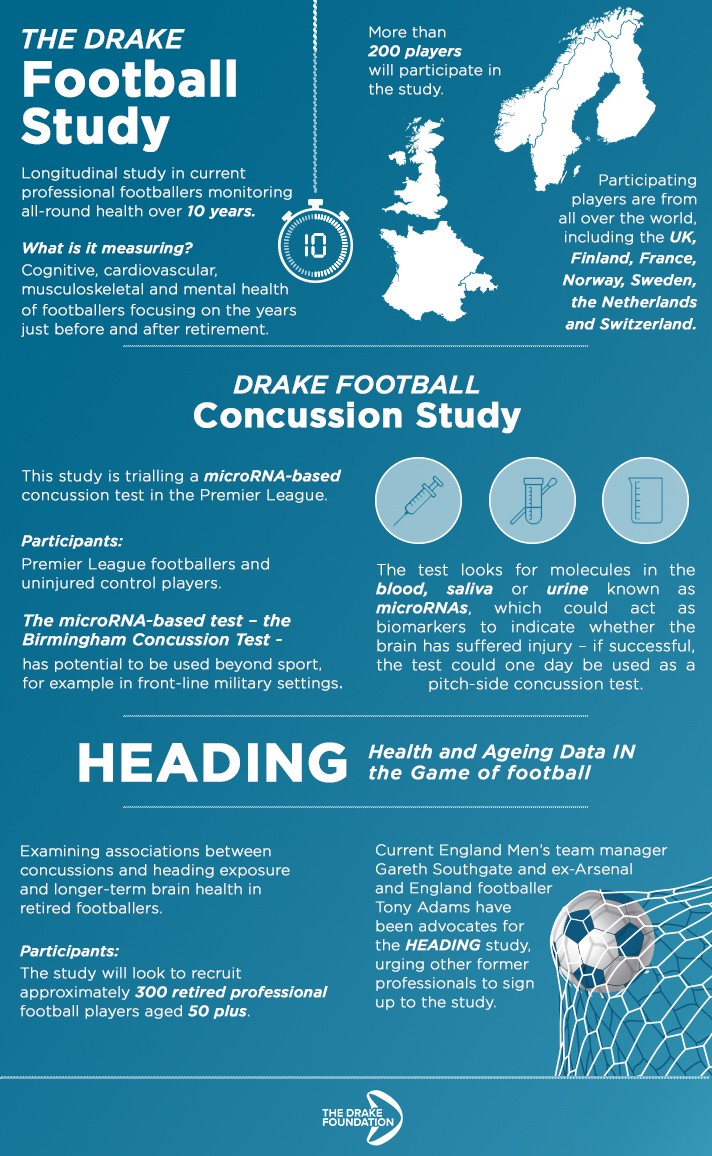 In 2018, we announced the HEADING Study. The study, also known as ‘Health and Ageing Data IN the Game of football’, is working with retired professional footballers to uncover associations between a history of heading the ball or concussion and neurodegenerative disease. The study will feature a series of tests to capture physical and cognitive capabilities, neurological clinical examinations, face-to-face consultations and analysis of blood samples.

The aim of the HEADING study is to better understand the long-term effects of a career in professional football, in particular heading the ball, on neurological .

In October 2019, we launched the most comprehensive study to-date to measure the mental and physical impact of a professional football career. Working in conjunction with FIFPRO, the world footballer’ union, the research is being led by its Chief Medical Officer, Vincent Gouttebarge, and will involve data collection of musculoskeletal, neurocognitive, cardiovascular and mental health trends of professional footballers over a 10-year period. The study will focus in particular on the years either side of the transition into retirement, which is a time that many elite athletes find difficult, in order to provide health insights on this transition.

The Drake Football Concussion Study is being run by the University of Birmingham and University Hospitals Birmingham NHS Foundation Trust and will involve pro players across the Premier League. The study will involve the collection of saliva and urine samples from the footballers over the course of several seasons, through to 2023/24. The data will undergo analysis in the form of the ground-breaking Birmingham Concussion Test which aims to detect biomarkers that can indicate brain injury.

The findings from the study could be potentially used to assist return-to-play decisions in-game, as well as be deployed across a range of sports, both grassroots and professional.

Other studies of note

There are also a small number of other studies that are currently taking place to better understand the impact of a professional football career and neurodegenerative disease.

In November 2017, the FA announced its decision to fund the Football’s Influence on Lifelong Health and Dementia Risk (FIELD) Study. The study, led by Glasgow pathologist Dr Willie Stewart, has analysed data from Scottish medical records in order to answer the question: ‘Is the incidence of degenerative neurocognitive disease more common in ex-professional footballers than in the normal population?’

Latest findings from the FIELD study found that former professional footballers in Scotland were three-and-a-half times more likely to die from brain disease compared to men of a similar age and background. The study is continuing to publish more data around disease risk, risk vs playing position and mental health outcomes.

Find out more about the FIELD study here.

Where can I find more information?